Light Within (Part 2) —Notes on Recent Work by Yuan Jai

Light Within (Part 2)
—Notes on Recent Work by Yuan Jai

The universe contains a righteousness
that flows through all things,
from the rivers and mountains below
to the sun and the stars above.

Two things fill the mind with ever new and increasing wonder and awe, the oftener and the more steadily I reflect upon them: the starry heavens above me and the moral law within me.

*The resplendent paintings of Yuan Jai express a world of images that reflect the artist’s lived experience. These images are dense concentrations of cultural knowledge that form a space for ethical and aesthetic contemplation—a space deserving of our appreciation and enjoyment. “Light Within” is a phrase adopted from Zou you ming (Motto) by Cui Yuan, a poet-scholar of the Eastern Han Dynasty. The full line—“that which is noble remains unsullied in the light contained within darkness”—is a reminder to seek the elusive light of virtue within the confusion and turmoil of human affairs. The Yuan Jai solo exhibition Light Within features paintings by the artist from the years 2018-2020. In these works, the artist has sought to explore and renew the potentiality of Chinese painting. Yuan Jai’s paintings represent a tenacious effort to create a space of both solace and transformation amid a volatile world, a space in which we may, through painted images, momentarily revisit the profound contemplation of life itself. 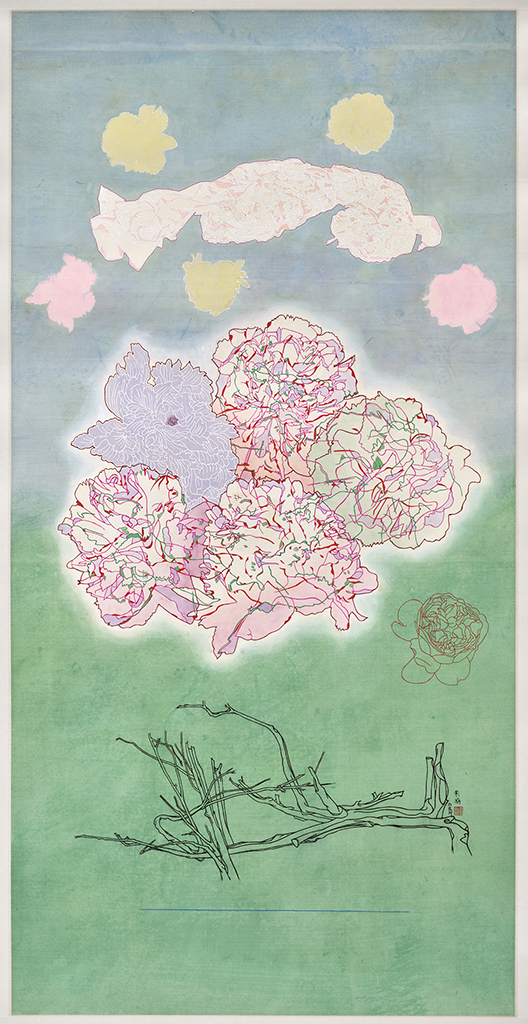 *The painting The Sublime in Dead Wood seems to evolve upward from the single horizontal line at the bottom of the composition, a subtle allusion to the concept of 一画 yi hua (a metaphysical theory of aesthetics expounded by the Qing Dynasty painter Shi Tao). Hovering above the dead branches is a cluster of blooming flowers, which in turn seem to melt into the clouds that float above them. Above the clouds, only the void of the sky remains. This series of images evokes the poignancy of the cycle of life and the process of sublimation: the unceasing transformations between life and death, substance and void. The flowers are dense with vibrant colors that contrast with the wiry intensity of the dead wood; then the blossoms give way to the clouds, an airy and light transformation, that exudes a sense of dynamic transfiguration.
The Chinese characters 华 (huá, part of 升华—sublimation) and 花 (huā—flower) have been interconnected since ancient times. The cycle of transformation between the dead branches and the flowers correspond to humankind’s search within nature for spiritual renewal: the release from what is withered and encumbered, the rebirth within the vitality of the flower’s new blossoms. Flowers blooming upon dead wood is an embodiment of “the dragon’s cry within the dead tree,” a Chan Buddhist koan from The Records of Dongshan (洞山语录) that expresses the notion of ease and self-abandonment within the cosmic cycle of life, death, and rebirth.

*
There are different paths up the same mountain
In the depths of the night, they all reveal one thousand snowy cliffs

Different Paths up the Same Mountain is a painting with literary origins in which calligraphy transforms into scenery. The lines of the brushwork produce a sense of magical charm and flickering light, evoking images from the verses of the Song Dynasty Chan monk Chongxian (980-1052): light, shade, and bright snow in the night. These undulating visions allude to the cyclical tribulations of the heart along the homeward journey of human life:

The night is dark, the snow is bright. The four oceans all meet here. Can you truly see what is dark and what is bright?

*The traditional expression “Shu Hua Tong Yuan (书画同源)” can be taken to mean that Chinese writing and painting share the same historical origins, and it also suggests that painting and calligraphy have certain aesthetic principles in common. In the words of the scholar Wen C. Fong, “painting can be treated like calligraphy [...] the brushwork of calligraphy is used in painting to unite self and image.” This unity lies at the heart of the particular expressiveness of Chinese painting.
It must be noted that Yuan Jai’s exploration of the connection between calligraphy and painting has taken place in the context of dramatic paradigm shifts in art theory and practice during the twentieth century. One such shift in twentieth century Western art was the use of written language to disrupt the traditional emphasis in painting on visual indulgence. Ancient Chinese scholars emphasized the aesthetic characteristics and cultural connotations of Chinese characters, but Yuan Jai goes further, experimenting with the fusion of language and painting. Calligraphy brushwork requires the artist to paint with a harmony of physical movement and spirituality; Yuan Jai takes this practice a step further by transforming this harmony into the gestalt that her paintings express.
As Sun Guoting (646-691) proposed in Treatise on Calligraphy: “Each brushstroke must contain a rise and fall like a subtle blade, and each dot must be as precise as the tip of a hair”, the expression of lived experience through the vitality of brush and ink is an unending process of exploration and renewal.

*The title of this painting, The Story of the Stone, inevitably evokes the classic Chinese novel Hongloumeng (Dream of the Red Chamber), which begins with a leftover stone from the mythological story of the goddess Nüwa mending the heavens. The stone, through ascetic practice, attains sentience and superhuman intelligence. This fantastical story has its origins in the long tradition in Chinese culture of metaphorical correlation between stones and human spirituality.
Qi Shi—“marvelous stones”—are rocks of unusual, abstract aesthetic qualities that Chinese artists have traditionally contemplated for visual inspiration. The subtle patterns of textured stone surfaces that appear in The Story of the Stone form a tableau like a museum of marvelous stones that transcends space and time. The characteristic soft hues of Yuan Jai’s painting seem to correspond to the abstruse significance of this space, in which rock forms and the ideas that we project onto them continuously fluctuate and merge. When our eyes reach the lower left quadrant of the painting, we see a combination of stone and coral that brings to mind the Chan koan of “branches of coral stretching toward the moon,” a striking manifestation of the spiritual and artistic significance attributed to stones in Chinese culture.


* The soft colors and pleasant images that appear in Yuan Jai’s paintings traverse a variety of artistic traditions, including literati art, craft, folk art, and palace art. This combination cannot fail to make a profound impression on the viewer. Some observers have described Yuan’s aesthetic as “feminized,” but in “Yuan Jai’s Deconstructive Paintings and Craft Conceptualism: Sentiments of the 1.5 Generation,” the scholar Aida Yuan Wong suggests that these gendered associations run the risk of oversimplifying Yuan’s intentions, and asserts that “Yuan’s sights were set on creating  an alternative Chinese aesthetic to traditional ink painting, and color revolution has been an integral part of this project.” Expounding further, Wong states that “a signature of Yuan Jai’s art is the marriage of brilliant colors with linear agility, which comes from her lifelong study of calligraphy.”
The origins of this long and formidable project can be traced back to Yuan Jai’s training in preservation and conservation of cultural artifacts at the Institut royal du Patrimoine artistique (IRPA) in Brussels in the late 1960s, during which the artist acquired an extraordinary understanding of color from a technical perspective. She later conducted research at the British Museum, where she encountered the Admonitions Scroll, which was painted with cinnabar paste and smoke ink; this famous work inspired her to explore the origins of ancient Chinese painting beyond literati landscapes. Yuan thoroughly scrutinized generations of Chinese textile art and other cultural objects, and this research substantially contributed to her adoption of a color palette that distinctively diverges from that of Western painting. Although Yuan Jai did not return to painting for more than thirty years, she never ceased to practice calligraphy. In her own words, “I simply take forms from ancient art and recondition them [...] and at first glance you can tell they are Chinese paintings, with ancient blood flowing through their veins.”[1] 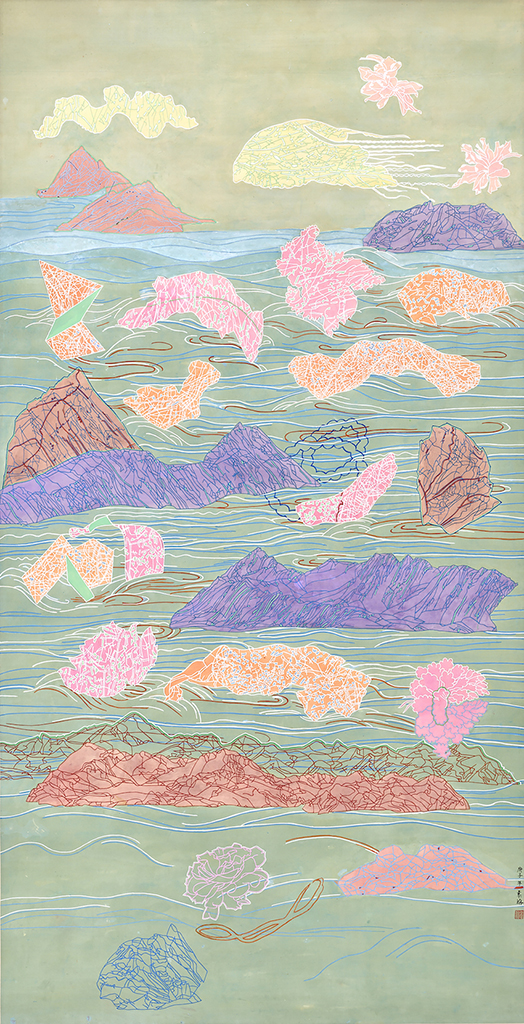 *In Auspicious Clouds in Summer, clouds seem to merge with both sky and sea. They appear buoyant, charming, and mischievous, as if they cannot resist a dance with the stirring, rippling waves. The rocky outcroppings in the sea similarly possess an energetic sense of movement, though their massive size seems to constrain their motion and lend them gravity. This gravity contrasts with the nimble midair shapes that combine the characteristics of stones, clouds, and flowers, effecting a magical, ephemeral fluidity of physical properties.
The artist uses countless interlocking layers of color and line to form robust shapes from the primal elements of cloud, stone, and water. Yet the boundaries between these shapes undergo continuous blurring, transformation, and deconstruction, creating a contrasting relationship between stasis and dynamism within the composition. Thus do these clouds evoke our fixed ideals of worldly forms—only to blow them away.

*Tao Yuanming’s fifth-century fable “Peach Blossom Spring” created the iconic Chinese literary image of “the peach spring” as an otherworldly paradise: a secluded shelter from worldly affairs where one can live in harmony with nature and one’s spirit. In the painting Peach Blossom Spring Water, the bountiful pool and massive rocky shapes seem to leap toward the viewer’s eye. The literary allusion is revealed in the grove of peach trees that occupies the upper part of the composition. Upon close examination, the crisscrossing lines resemble a map of city traffic or a biological nervous system, trembling and expansive.
The spatial image of an array of stones that occupies the center of the painting, derives from a trip to southwestern England that the artist took in her youth. During her travels, she specifically sought out Stonehenge, and the sight of those massive stones solemnly presiding over the open country profoundly resonated with her. In the many years since, the artist has refined and adapted this image, representing it in this artwork with floating stones of green and blue.
On the other side of this labyrinth of stones lies a pool of gently rippling spring water. If Stonehenge originally served as a gateway for humankind’s exploration of the cosmos—a venue for contemplating our relationship with the heavens—then how might the peach blossom spring form an extension of our ancestor’s yearning for a place of serenity and solace? 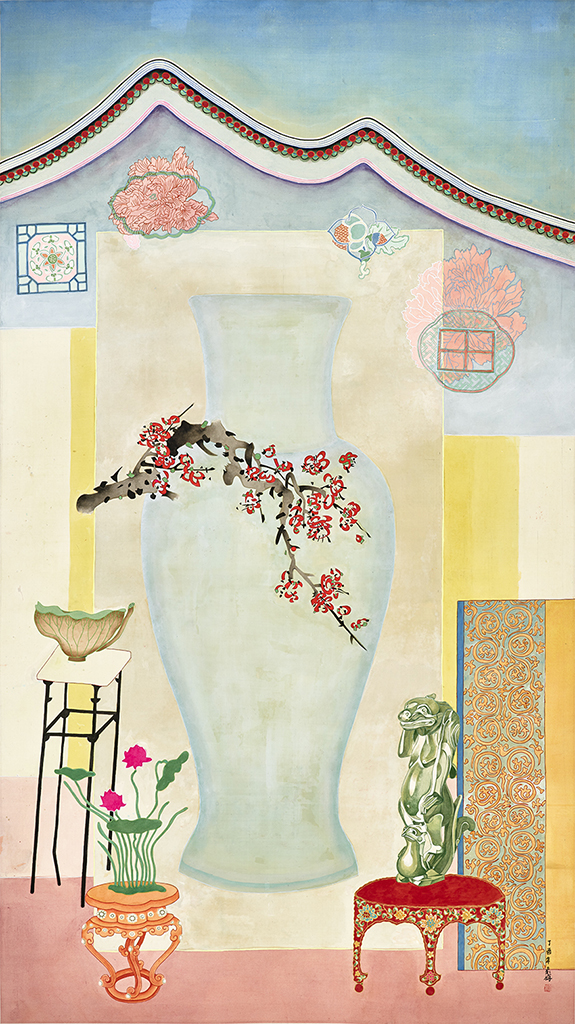 *The vase in Amor Fati (Love of Fate) presents a form that possesses spatial volume. The emptiness of the vase is an element of its form that directly manifests as “space.” Its external form and internal void are unified complementary components of mold and reference. Notably, the vase is not an isolated space. It exists in a relationship with humankind of continuous reciprocal care. The vase, with its graceful shape, soft colors, and smooth texture, emits a comforting energy, and moreover, the Chinese word for vase has a peaceful connotation. The character 瓶—píng—is a homophone of 平—part of平安, the word for peace and safety—thus does the space contained within the vase signify vital shelter.

* By employing many subtle variations in her layers of line and color, Yuan Jai creates fluid composition of multitudinous, nonlinear, and centerless motion. The ceaseless fluctuations of color present visions of a vivid, lithe topography. The accumulated sediments of the millennia unite with the dynamic terrain of the present, transforming us into nomads within the moodscapes of her paintings while avoiding an overly concrete intellectual significance. Instead, her work invites us to directly interact with the history and motifs of painting itself. 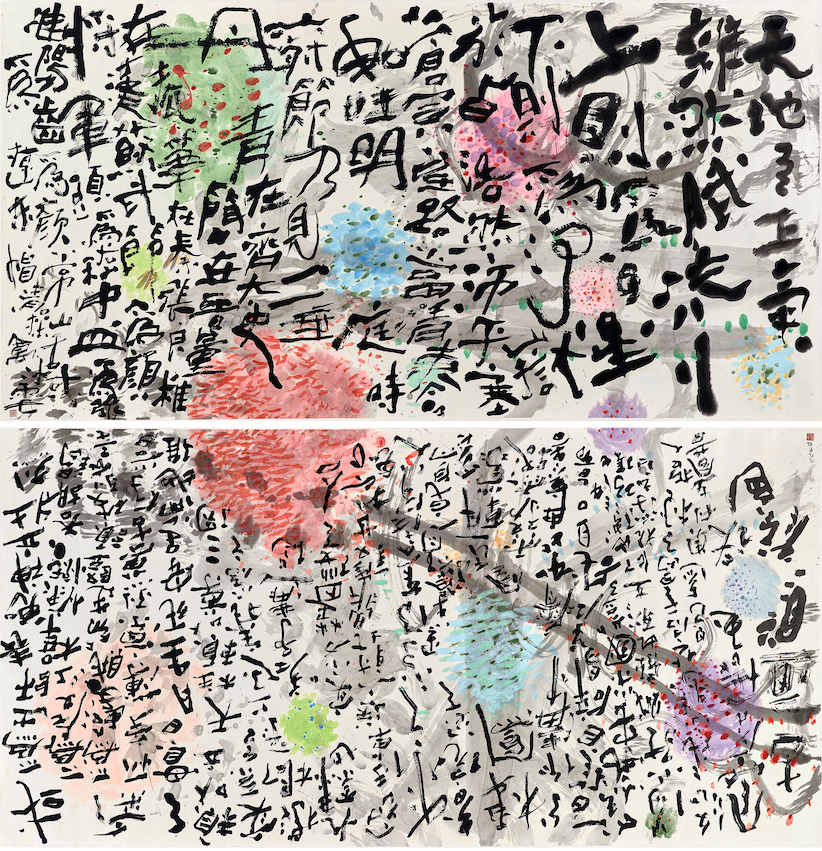 Text: Hu Fang
Courtesy of the Artist and Vitamin Creative Space.
All art works by Yuan Jai © the Artist

Prev: Light Within (Part 1) —Notes on Recent Work by Yuan Jai Next: FU: The Art of Yuan Jai