Grazie, Daughters of the Wind

I have come to this island in search of a desperate mother. In order to liberate her son from the desires of the world, she turned herself into a stone.

I have come here, following the wind’s footsteps. They led me to cliffs by the sea, meadows in the hills, and finally, Domus de Janas (Houses of the Fairies). Chiseled out of the rocky hillside, these caves stand in resolute silence. Even the wind stops here. The desperate mother would have looked up into the star strewn night sky from a mountain top like this, praying that her son would soon be freed of his earthly desires. And I have come here, harbouring within me the inexplicable hopes of a person gambling with fate.

One blindingly sunny mid-day forty-seven years ago, he pulled the trigger on a naked man on the white beach, and disappeared from the crowd’s lines of sight. People believe that he is still on this island. They say, he dedicated his life to God after shooting his rival, resolutely abandoning the lonely and seductive woman.

I have come here, as the noontime sun ignites long forgotten memories. Memories are stored on this beach, much like how the basalt in the mountain contains stories thousands of years old. On this island, forgetting is such a difficult thing to do.

The madly overgrown cacti blocked the entrance to the Houses of the Fairies. My hand’s grip tightened, holding in it air and moisture. When I first entered the cave, despite my eyes’ inability to adapt to the dimmed light rays, the cave’s depth attracted me to go further in. 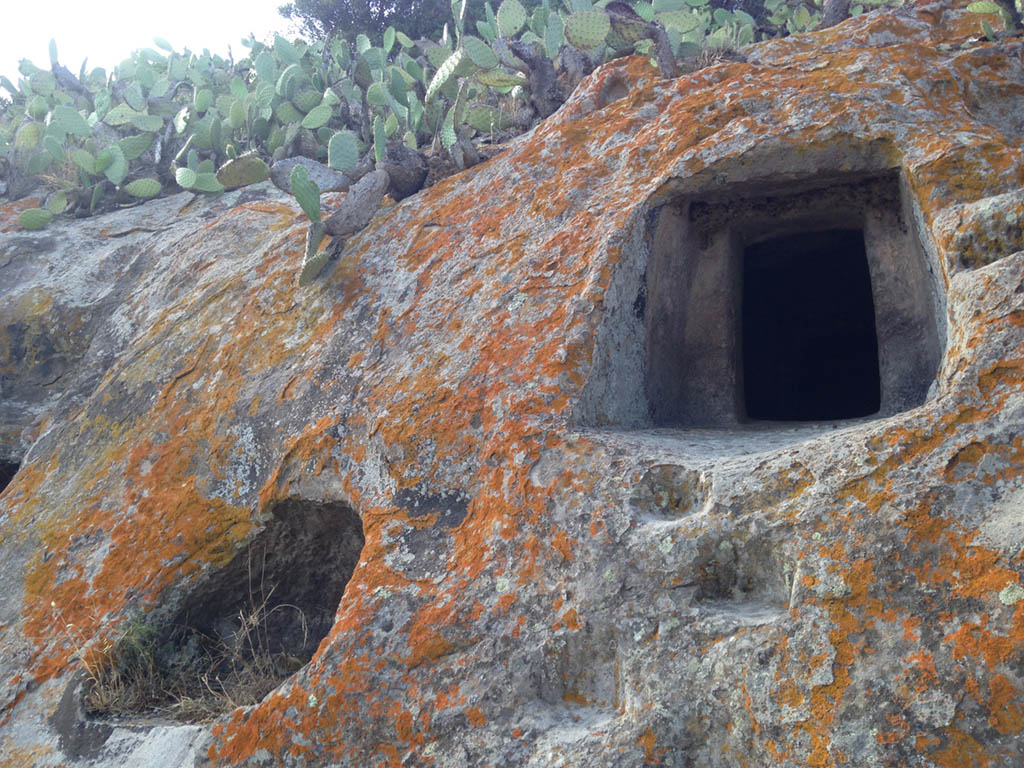 As one cave led to another, fragmented solar patterns and contours of human figures began to surface on the walls. The ground heaved ever so slightly, tipping me off my balance. I was particularly drawn to the anonymous carvings on the walls, they looked like traces left hastily by the fairies before they vanished. In times before language existed, writing is somewhat equivalent to mark-making on rocks, and every trace sharply conveyed a message from another world. In those times, to speak was to moan and cry out. These caves are intricately linked through their acoustic structure, a multi-layered soundtrack that recorded sounds from prehistorical times. 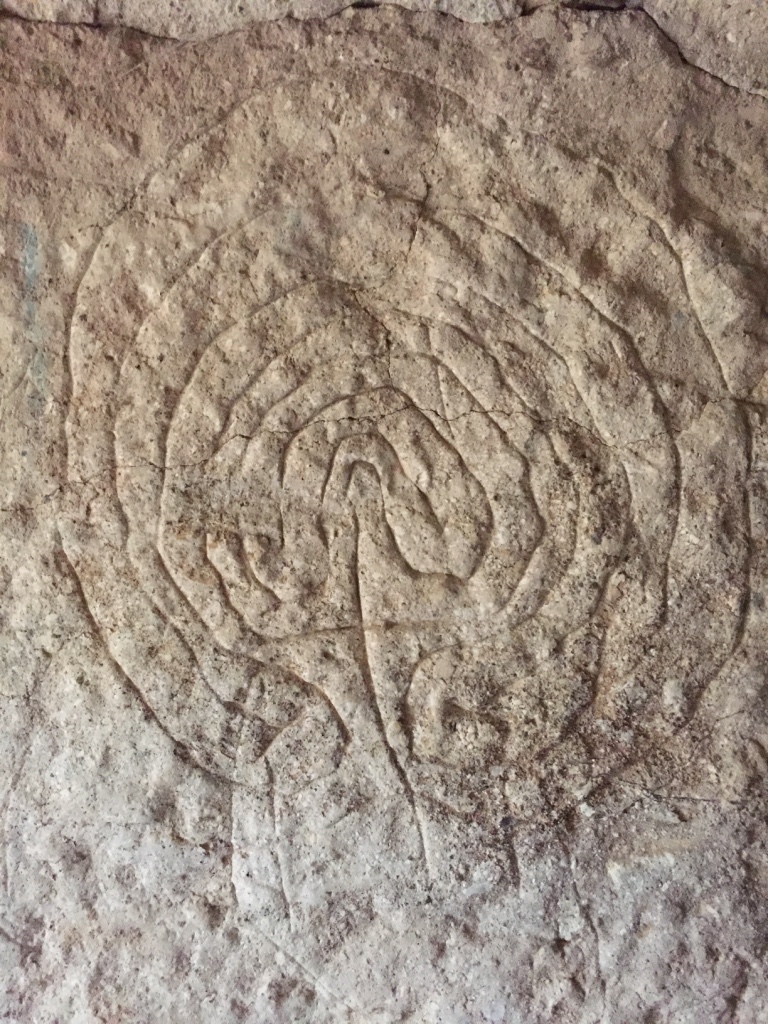 She was desperate, but also magnificent; she was fragile, but also courageous. Her homeland was famous for its bread and textiles. Labouring day after day on the island prevented her from traveling afar, so she decided to let the island winds shape her physical form, turning her own body into an allegory of life.

If I were invited here to weave, to leave a message amidst the complex network of patterns, the threads I weave would follow her will, the landscape my fingers craft with the loom would reference her body. Wrapped in the freshly woven blanket, I would roam the gaps of the winds, following the spiral stone steps of the Nuraghe to arrive at the open dome—the “eyeball” that opens up towards the sky, and with the gigantic rocks by my side, gaze towards the far horizon. The moon rests quietly on the sea surface, the tranquil ocean connects divided land masses. Before the world’s revolution even started, peace had already descended here.

I continued walking towards the meadow in the valley. I encountered the huge rocks in the wilderness, and felt as if I walked beyond history. These rocks lay across the wilderness steadfastly, and archeologists shall be the ones telling us the exact timing when they came into being. Yet if no one were to know these rocks’ presents and futures, they would become signposts for measuring time anyway, through their specific form, weight and accumulated energy.

Finally, I found myself lying at the entrance of “The Giant’s Tomb” (Tomba dei Gianti), my head pointing towards the depths of the tunnel. All was silent at this moment, one could even hear sound of white clouds floating in air. If we had a bird’s eye view, I am certain we would see the body of a giant, an architecture built for supernatural powers, but its crux—the tunnel leading towards next lives—is empty. Once occupied by deities, the slow passage of time has rendered it a ruin, accidentally exposing the structure’s hollow centre. This emptiness within supports the rocks’ enormous weight, creating a lightness in the spaces they construct. Would this emptiness be the place where gods and mankind coexist? 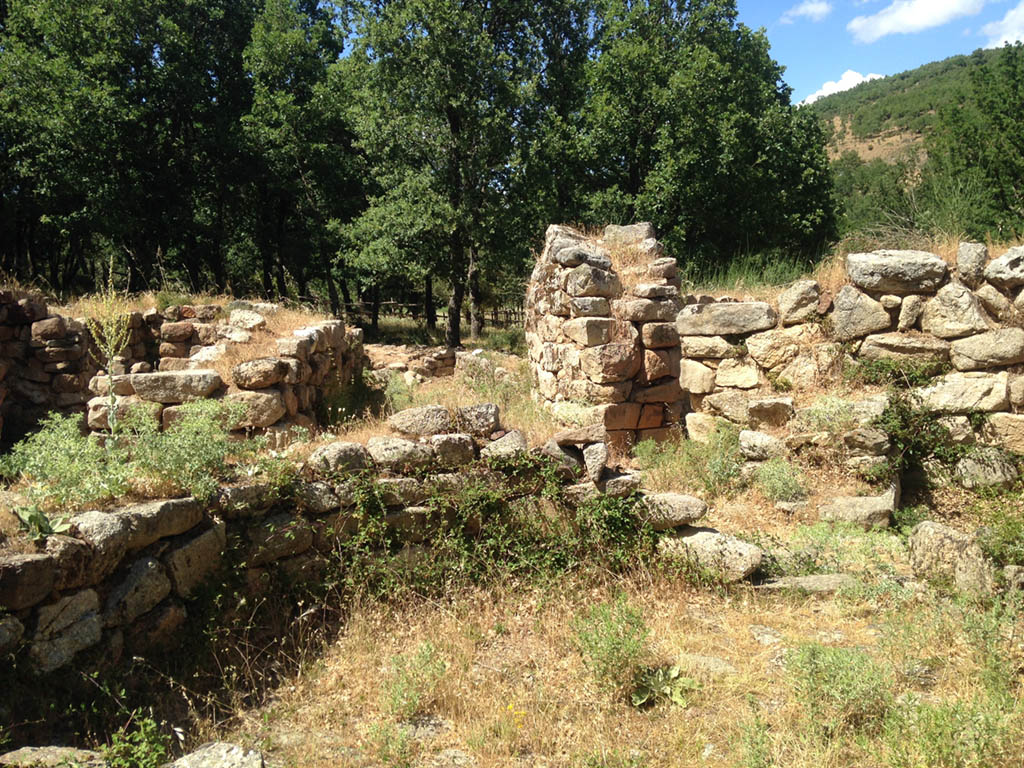 I realised only afterwards that she was collecting plants and herbs in the wilderness in preparation for an impending healing treatment when I passed through the meadow. A wooden bed was erected midair in her home, making it easier to fly when dreaming.

When I passed through the meadow, I would not have known how close “The Holy Fountain” and “The Giant’s Tomb” are to each other—the intimate relationship between them can only be seen looking down from midair. When “The Holy Fountain” came out of hiding in the woods and appeared suddenly in front of my eyes, it made me dizzy. Sunlight dancing in the green bushes, I seemed to see lurking creatures walking around the holy fountain. The fountain continuously seeps out from ancient drains in the mountain, its water still crystal clear after a thousand years, echoing the deep sighs of the earth.

Through the gaps between the rocks—a window!—I saw the sky, its blue framed by the enormous rocks’ edges as if it were a painting. While the “receiving window” accepts light emitted by nature, it also projects hope of those imprisoned.

“Send me news about the small lemon tree: has it grown? how tall is it by now? is it healthy?” [1]

What does it mean to “sculpt” on this island then? The prehistoric spatial forms standing unwaveringly on the earth are in the end supported by emptiness at their centres. Is this where desperate mothers have always existed? Is this where stubborn sons have repeatedly escaped from? 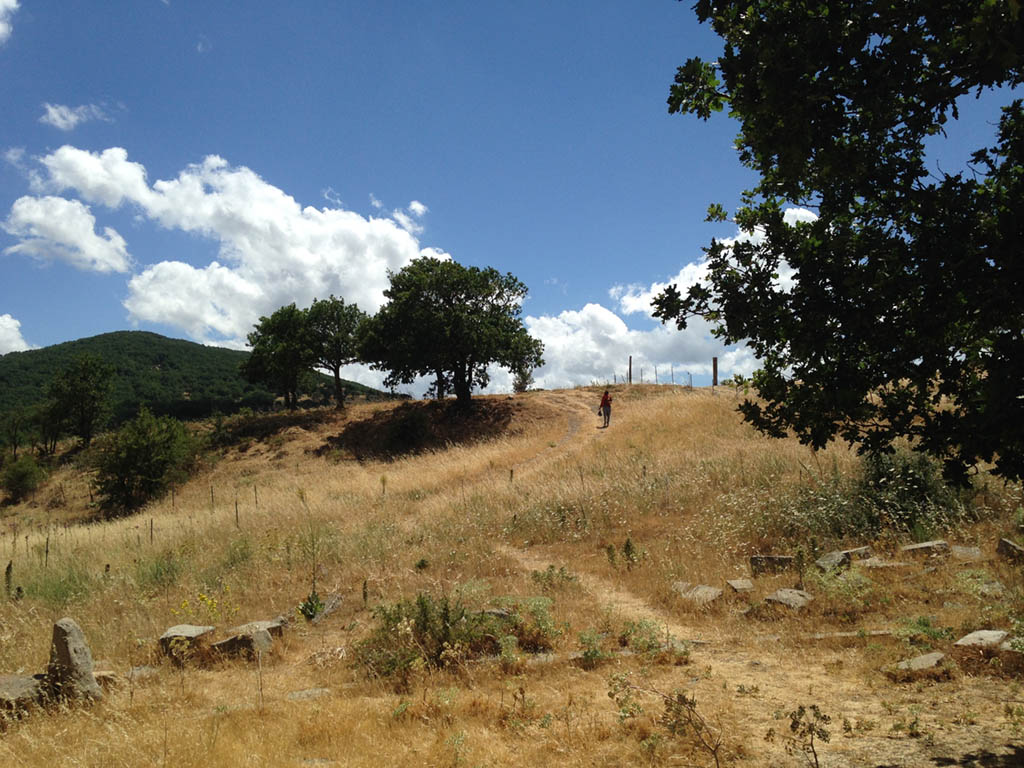 A group of weathered giant stone sculptures stand in the middle of the city square. Here I met a person who has returned home, one who dreams of leaving, one who struggles to stay, a lover of dialects, a homeless person, and one who has a home he cannot return to.

Once the wine bottle is opened, it can never be closed. We forget our own sorrows as we drink and drink. The windows of an apartment on the second floor of a building swings open suddenly. Dreams of the youth are thrown out towards the street with hasty words. Debates on daily life between two generations go on endlessly. Flies swarm, circling and dancing around people, it is rumoured that Satan’s soul lives on flies’ bodies like parasite.

When I returned to the crowd, I saw the stranger wandering around the sculptures in the square. He said his mother over-worries and cries all day. He said, like all men on the island, he never believes in destiny. Even if he were to become a beggar, a person who could only receive wine given by others, he would still remember her eyes.

I have come here, knowing that I have to face a reality as such: emotions once erupted go into exile because they overflowed the brim of destiny each of us can bear; they are in turn reshaped into sculptures by winds, and the heat of the earth.

[1] These urgent questions are from Antonio Gramsci’s prison letters. These letters were the only way he could stay connected with the world when he was imprisoned. He wrote to his mother, “I have been missing you immensely these few days. I think about how I am bringing you renewed suffering in your old age and on top of your previous experiences of hardships. In spite of this, please be strong, like me; please forgive me with your kindness, generosity and unconditional love. It gives me immense strength knowing that you are facing misery calmly and with fortitude.” From Antonio Gramsci, Letters from Prison (Volume 1), translated by Tian Shigang from GRAMSCI, LETTERE DAL CARCERE (Editrice l’Unita, Roma,1988), Jilin Publishing Group Co., Ltd., 2017, pp. 2-3, p. 24. English translation of quotes in this footnote are by the translator.

Prev: Surplus Time Next: A passage to a quasi room ( of waiting for A Fiercely Affectionate Sculpture)